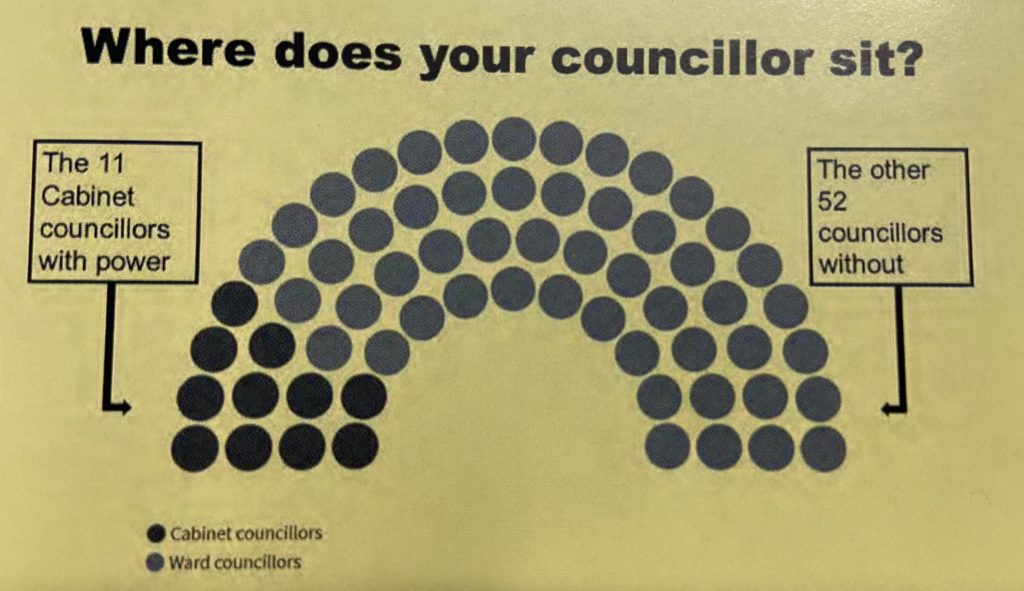 There are 63 elected councillors in Lambeth Council, all voted for by Lambeth residents.

You may be tempted to assume that when you vote in a local councillor, they go to the council and have an equal vote on issues affecting the borough along with all the other councillors. That way, every councillor speaks up for their own ward, so everyone gets equal representation.

And that’s the way it was in 2000, but Lambeth then moved to a different system, where power is concentrated in a ‘cabinet’ of just 11 councillors, disenfranchising the other 52 and the wards they represent.

Yes, it’s entirely unfair. So why would anyone want such a system?

You may again be tempted to assume that a local council is all about local representation, but in the case of Lambeth there is reason to suspect otherwise. The ‘cabinet’ represent a sect within the Labour party called ‘Progress’, who seek to influence and control the Labour party with their own agenda.

That agenda may be nothing at all to do with Labour policymaking in general, or the general views of Labour voters or members, yet that’s the policy enforced by the Progress-controlled cabinet. According to Brixton Buzz:

The role of the other 52 ward Councillors is largely reduced so that they head nod through Progress policy. The Lambeth Labour whip system means that internal dissent is not allowed.

It doesn’t matter much what ‘Progress’ stand for. People voting assume that they are either voting for someone who will represent their ward, or voting for the wider policy that person’s party stands for. In fact, they’re voting for the unknown agenda of a select few. The people of Lambeth who vote Labour (the vast majority) are being entirely fleeced by their council in what to me is a hijacking and abuse of the democratic process.

Is anyone doing anything?

There is an online petition you can sign here, but Lambeth have done everything they can to squash it, refusing to host it on the council e-petition website (despite it being exactly what the site is for) and issuing three letters from their legal team within weeks of the petition being launched.

This smacks of totalitarianism. Not only have Progress hijacked the democratic process in Lambeth but are also trying to use their power to prevent anyone speaking out about it or having their say.

In the light of this, it’s easy to see the Progress-controlled Labour council as simply a vehicle to push through the Progress agenda without any consideration whatsoever of what local people want or a genuine mandate to take any action.

It seems that democracy in Lambeth is truly dead, and as long as you’re voting Labour (as the vast majority are) then your vote counts for precisely nothing.